The Summer holidays have kicked in this week and we have been busy, busy, busy.

With daily visitor numbers going up it means the keepers are in full swing on the education & entertainment front.  When I first started at Birdland nearly 12 years ago we used to do just a daily penguin feed, lasting 15-20 minutes.  Now, we have a full schedule of events to interact with the public.
The first talk of the day is the Flamingo talk, held at Flamingo River, where we feed our flock of 17 Greater Flamingos.  This takes place at 11.30 every day and can last for up to 25 minutes depending on questions, and if the birds are being noisy & you can’t hear what we are saying.  We teach people about the 6 different species, where they live, how they breed, why they are pink & why they stand on one leg.

The next talk is Meet a Keeper, held at the Encounter Zone by the Ibis aviary at 12.15.  This is fast becoming one of the more popular parts of the day with it being so busy this week we have had 2 keepers plus volunteers & work experience present just to meet the demand to meet some of our animals.  You can see us fly some of our owls, meet & hold some of the birds & if you are feeling brave, the snakes & cockroachs may also be present.  This is also the chance for the keepers to interact with the public and answer any questions they may have.  Never be afraid to ask, we have heard most questions over the years! 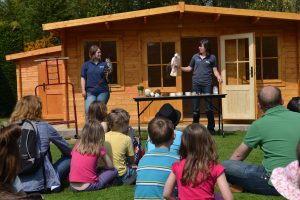 Please note my sister was a little nervy of the snake!!

2.30 sees what, for me, is the highlight of the day.  Penguin Feeding time is one of our main draws with Englands only King Penguins plus our group of Humboldts.  Here we talk about the different types of penguin, where they live, different sizes & how we look after them.  What appears to be the most popular part though is talking about the individual penguins in our rookery and how you can recognise them.  We talk about Spike and how we hand reared him from hatching to adulthood and also introduce the rest of the group.  We can be there for up to 45 minutes (longer if we had the time). 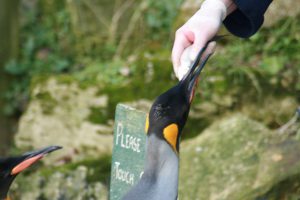 From one fish eater to another, we then move to the Pelicans for their feeding time at 3.15.  Again we talk about the management of the birds as well as our previous links to the RAF and its always great to see a bird with a big mouth and large wingspan!

Occasionally we have special talks as we did this Sunday just gone when it was International Owl Awareness Day.  Meet the Keeper was an Owl special but we also did a guided Owl walk in the afternoon, where guests could follow a keeper as they went around feeding the owls and talking about our various species and owls in general.  This seemed to work really well with upwards of 40 guests at one point.
Also at this time of year we have a Summer Quiz trail around the park.  This is designed to get people reading the labels and learning more about the birds.

This weeks news now and we’ll start with the ongoing Marabou Stork introductions.  We have been building up the amount of time the pair spend together, with the best so far of 2 hours of supervision.  There hasn’t been much interaction so we are now starting to place them together in a more confined area for shorts amounts of time.  This has led to a bit of squabbling but we are always close at hand and no injuries have occurred.  This will be an ongoing process 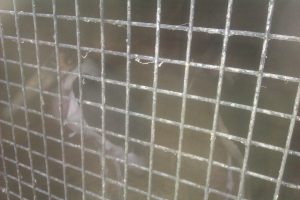 Unfortunately the African Spoonbill chick did not survive.  We have been following advised guidelines from the Studbook Keeper but were warned they were notoriously difficult.  The second egg started to hatch but died off and upon opening the egg it was found that the chick was in a terrible position with its head underneath both its wing and foot, making it impossible to hatch.  This is something we can do nothing about as when you candle the eggs you cannot tell what is where.
On a brighter note, mum has recovered well enough to go back out in the aviary.  We have 2 males in there who were both pleased to see her, making lots of noise and she seems to be hanging around with her usual partner, who fathered the eggs so fingers crossed for more eggs.
Our ‘female’ Siamese Fireback Pheasant appears to be developing male plummage.  This is not unheard of in the pheasant world and can be caused by a number of things including lack of males and ovarian damage.  Lack of males is certainly not an issue as she has had a male present for most of the year.  We’ll watch this space…

We have broken the female Trumpeter Hornbill out of her nest, one sloppy egg has been removed and one egg was broken
The Humboldts continue to moult, with Arthur, Molly & Ron finished and the other 5 at various stages
4 Roul Roul Partridge eggs from our pair in the Discovery Zone have gone in the incubator.  Our other pair have 6 eggs due to hatch this week
The Tawny Frogmouth eggs were found broken this week
We have moved the Western Grey Plantain Eater off show as she decided to attack both Golden Pheasants, no damage done

Hand rearing wise the Yellow Shouldered Amazon chick is now fully feathered and starting to be weaned, nibbling at bits of fruit.  It now spends part of the day outside as we get it use to other birds, noise and the weather and also to perching and climbing

Monty the Macaw is still coming along.  He/she is now 2 months old and fully feathered on the wings with the start of some feathers of the back coming through.  The bird is down to 2 feeds a day and we are spending time getting it used to sitting on the hand.  If left with the parents it would be at least another month before fledging so we are not quite at the weaning stage yet

The Kookaburra chick is doing well, feathered up, calling and bashing its food like a good Kookaburra should.  A few very short flights have been attempted

The Chaco Owl is now flying most days at Meet a Keeper.  After a public vote the name Eva has been chosen.  She has flown on top of a couple of aviaries but always come back (just show her some chopped chick!)

The Northern Helmeted Curassow chick is now out in one of our off-show pens.  The plan was to use this bird for the educational talks but although it has been hand reared it is extremely nervous of us so may go on to be a breeding bird.

Nature wise, the warmer weather has mainly resulted in lots of insects as you can see below, the buddleias are attracting all sorts of butterflies

Large & Small Whites have been common all year

Theres been an explosion of peacocks this week

The first Comma, Grayling & Red Admiral have been seen this week

I think this was a very active Small Skipper

This Red Underwing Moth was in the Discovery Zone

Again, I can’t be sure but I think this is a female Stag beetle

The Kingfishers have been heard but not seen this week