As you will have seen from the past couple of blogs, the keepers are currently busy playing Mum & Dad to a variety of different chicks.  This weeks blog is all about how we go about raising the chicks.

There are many reasons why we may hand rear a chick.  In some cases it may be that an egg or chick has been abandoned by the adults or is at risk from being damaged/broken/attacked by the parents or another bird in the enclosure.  Sometimes removing eggs/chicks is a way to increase the number of hatches from a species, i.e. if the eggs are removed early, the adults will produce a second clutch.  Hand rearing can also provide staff with experience, which could be vital at a later date.  Finally, as is the case this year, hand rearing is used if we want to have birds for the displays.  That way the animals can be used to people and noises and won’t be distracted/disturbed by noise/cameras/dogs etc

Several considerations have to be taken into account before hand rearing starts.  Where would the chick hatch?, how warm does it need to be kept?, what is it fed, how much and how often?.  Most importantly, do we want a tame bird for displays or a bird that will go into the breeding programme.  This will affect how hands on we will be.  These are all questions that are discussed and researched well in advance of hatching.  In this day and age there are so many guidelines available in books and online.

Hand rearing starts as soon as the egg starts to hatch.  Hatching eggs are removed from the incubator and moved to a hatcher unit where temperature and humidity can be closely monitored without the egg being turned.  It’s vital that the egg(s) are kept at a good level of humidity to enable the chicks to hatch and we regularly spray hatching eggs with warm water.
Once hatched chicks are given an initial health check to make sure everything is OK and the umbilicus is sprayed with anti-septic spray.  The umbilicus is where the chick was attached to the yolk.  The chicks are then left to dry out and recover for at least 12 hours.

Hatched chicks fall into two categories, Precocial chicks hatch with feathers and are immediately mobile (ducks, pheasants, rheas) whilst altricial chicks hatch small, bald and often blind (birds that nest off the ground – parrots, owls & finches).  Precocial chicks tend to be the easier ones to hand rear as they maintain some body temperature themselves and are often able to pick at food themselves very early on, although sometimes a little help is required.  In the case of our Black Necked Swan cygnets we sprinkled a little bit of feed  onto their backs to encourage feeding, the cygnets pick at the food to get it off their back.  Precocial chicks immediately need quite a bit of room in which to move and build up strength, and in the case of waterbirds such as ducks & swans need space to have access to water to learn how to swim, waterproof themselves & preen 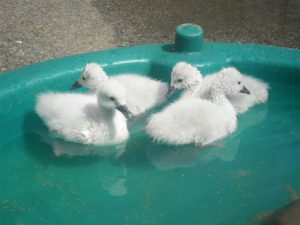 Altricial chicks, if left with the parents, would need brooding for a period of time as they cannot thermoregulate.  These chicks are kept in brooder units when hand reared where temperatures can be kept high.  Unlike precocial chicks who can feed themselves and be left with a dish of food, altricial chicks need regular feeding throughout the day.  Obviously the type of food varies depending on the species and the number of feeds a day also vary massively.  Penguin chicks get 4 feeds a day, flamingos 6, hornbills 7 & parrots 10.  This means many a late night/early morning.
Before feeding chicks are weighed as for many species they are fed a percentage of their body weight, with the Macaw we are currently give 10% of its weight at each fed.  It vital not to overfed as chicks that are overweight may develop health issues.  With altricial chicks this can often  be judged as you can see their crop filling.  The crop is part of the upper digestive system that can store food 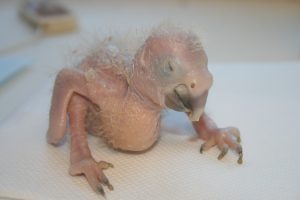 Military Macaw chick 2010, note the crop is a slightly different colour where it is full of food

Diets vary massively depending on the species.  For the parrots we use a commercially made powder formula that we mix with varying amounts of water depending on the age of the chick.  Fresh formula is made at each feed and heated to a certain temperature so as not to be too cold for the chick but not so hot as to burn the delicate throat of the youngster.  Food is administered via a bent tea-spoon or syringe and the chicks head will initially have to be supported for the first few days.  Penguins get filleted fish, squid, vitamins and water in a delicious paste whilst flamingo diet includes prawns, egg yolk & porridge oats.  For the birds of prey small de-boned bits of chick or mouse are offered via tweezers.  All chicks very quickly figure out whats going on and will beg for food.  Water is often already in the mix but for the meat eaters food can be dabbed in water prior to feeding. 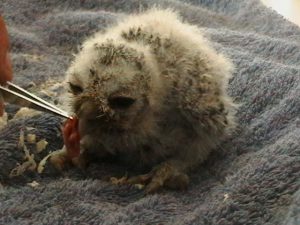 Chicks are kept on various substrates.  To start with this will be on paper towels to enable keepers to monitor that dropping are being produced.  Little or no droppings may indicate that the chick may be dehydrated.  Once we are confident that the birds are processing their food then they may be moved on to wood-shavings to simulate a more natural nest environment.  Its important to keep the chick as natural as possible to avoid any health problems such as splayed legs.  These problems can be corrected but it’s always best to avoid them in the first place.
Hygiene is vital in the initial care of the chicks.  Fresh food is made at every fed for most species, or discarded after 24 hours if not used.  All equipment is thoroughly sterilised and hands washed before and after every feed.  After the first week the chicks will get a course of antibiotics.  Substrate is changed at each feed as well.
Records are kept at every feed of the chicks weight, the time it was fed, how much it was feed and to note anything of interest.  Keeping records means we can refer to the notes when attempting hand rearing in the future.  We can also share these with other breeders and zoos.  Chicks are rung to identify the individual birds
As the chicks develop feathers we reduce the temperature they are kept at and begin to offer more room.  In the case of this years Chaco Owl, it was able to hope around at approximately a month of age and although it cannot fly as yet, is regularly testing its wings so it is now kept in a pen as opposed to a brooder box.  Feathers will be taken for sexing if we are unable to distinguish if the bird is male or female.

The chicks we are currently hand rearing are all doing well as you can see from the pictures below.  Our Kookaburra egg hatched last Friday at 25 grams and has already triple in weight.  The Military Macaws eyes are starting to open whilst the 2 Yellow Shouldered Amazons continue to thrive.  The Black Necked Swan cygnets are spending more time swimming and the Northern Helmeted Curassow chick is getting big.  Finally, the Chaco Owl is not far away at all from flying. 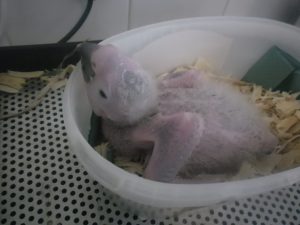 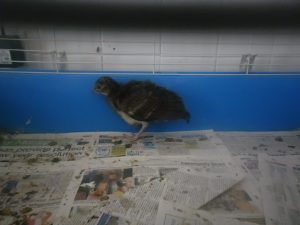 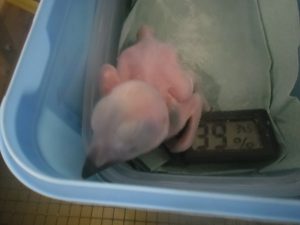 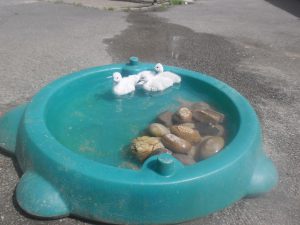 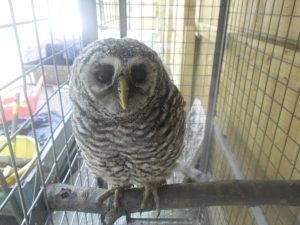 It’s with regret that we have to report the loss of the Humboldt Penguin chick.  The youngster was found dead in the nest Sunday morning and a post mortem showed that it had some feathers in its digestive system.  These were probably fed to the chick by the parents rather than it picking them up itself.  it’s unlikely that the parents will lay again this year.

In happier news we have had another King Penguin egg.  This time it was Syd who has produced the egg which is now in the incubator along with Bills 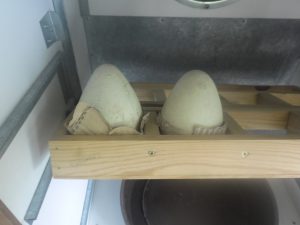 A second pair of Waldrapp Ibis have chicks, with 2 youngsters seen
The Splendid Parakeets have chicks again
The African Spoonbills have laid their first egg
The Black Swans have been moved back off show temporarily.  They had been spending time together until Thursday when the male starting becoming aggressive towards the staff.  He was not seen harassing the female but she has been hiding away from him so they have been put together in a shed again to re-bond them

Not much to report nature wise other than a young grass snake has been seen and there is a massive number of rabbits about at the moment.