The week just gone may have been the best one yet in my 11 plus years of working at Birdland.

The major highlight was undoubtedly meeting, watching & working with Sir David Attenborough. He came in before opening on Friday to do some filming for his new series David Attenborough’s Natural Curiosities, to be aired on Eden TV later this year. On screen you will see him sat on a rock amongst the Kings but what you won’t see is me with a bucket of fish trying to coax the Kings into position. Usually for this we use Spike, the King we hand reared in 2007. Initially he was good but got more interested in me as filming went on, thankfully Bob, Ollie, Oscar & Norman played ball. 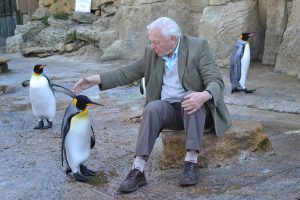 Sir David was lovely and spent a few minutes chatting with me about the penguins, asking how we recognised individuals. He happily signed autographs for the staff and volunteers and posed for a few photos. A real privilege.

Monday saw the Bank Holiday and we were praying for Sunshine. We were not disappointed with glorious weather and possibly the busiest day I’ve ever seen. Over 1500 people came through the gates, that’s 2% of our annual gate in previous years. All 4 keepers were in and kept busy all day, Helen doing the duties and helping Chris & Rob at the Encounter Zone with hands on with the public whilst I was busy doing talks and emptying bins. Some of the bins were emptied at least 5 times in the day. It was great to see the park so busy and a massive thanks to all the staff for their efforts, I think everyone left happy.

Bank Holiday Monday was made even better by the first King Penguin egg of 2013. The egg was produced by Missy & her partner Seth at around 9am. Because of a number of factors (age, the heat etc) we have removed the egg and will incubate it ourselves. After cleaning the egg in mild disinfectant the egg was weighed (262 grams) & measured (11.5cm by 7.3) before being placed in the incubator. We will weigh the egg every other day to chart its progress and we will know within a fortnight as to whether it will be fertile or not. I’m personally not holding out much hope as these are our oldest 2 birds, the egg is quite small and they have not bred successfully for 10 years as a pair, but you never know.

With the warmer weather we are also having a big push to encourage the Greater Flamingos to breed. We have been digging over the nest island and introducing fresh substrate to encourage nesting behaviour. Flamingos like fresh earth with which to build their mud nests so the island will be turned over weekly from now on. We have water pumping around the island and are spraying the island as well to keep it nice and damp, and a couple of artificial nests have been created as well. The birds have spent much of the day on the island and there has been lots of display and calling so watch this space.

In other news this week

Humboldt’s Chloe & Myrtle have 1 egg, no sign of a second egg yet. Chloe has also been seen trying to mate Millie several times
The Snowy Owls were seen mating
The Trumpeter Hornbill female is starting to investigate the nest box and has been narrowing the entrance with mud
The Black Necked Swans now have at least 4 eggs
The Splendid Parakeets in the finch aviary have 2 chicks
We are pretty sure the Yellow Shouldered Amazons have eggs as the female is not leaving the box and the male is becoming aggressive
The Northern Helmeted Curassow have also starting laying, one egg has gone in the incubator to see if fertile whilst a second egg was laid this morning
The Blue Pie pair that we keep off show have 6 eggs
Our pair of Roul Roul Partridges in the Discovery Zone have started laying eggs, they have broken at least 2 so todays egg has been removed. We will wait for more eggs before setting in the incubators
The Golden Pheasants are laying eggs
The male Siamese Fireback Pheasant has been moved to an aviary next to the female for a slow introduction. The male Edwards Pheasant has therefore been moved into the middle of the park
In Marshmouth theres still no sign of any Grass Snakes or Dragonflies but we are starting to get a few more Butterflies