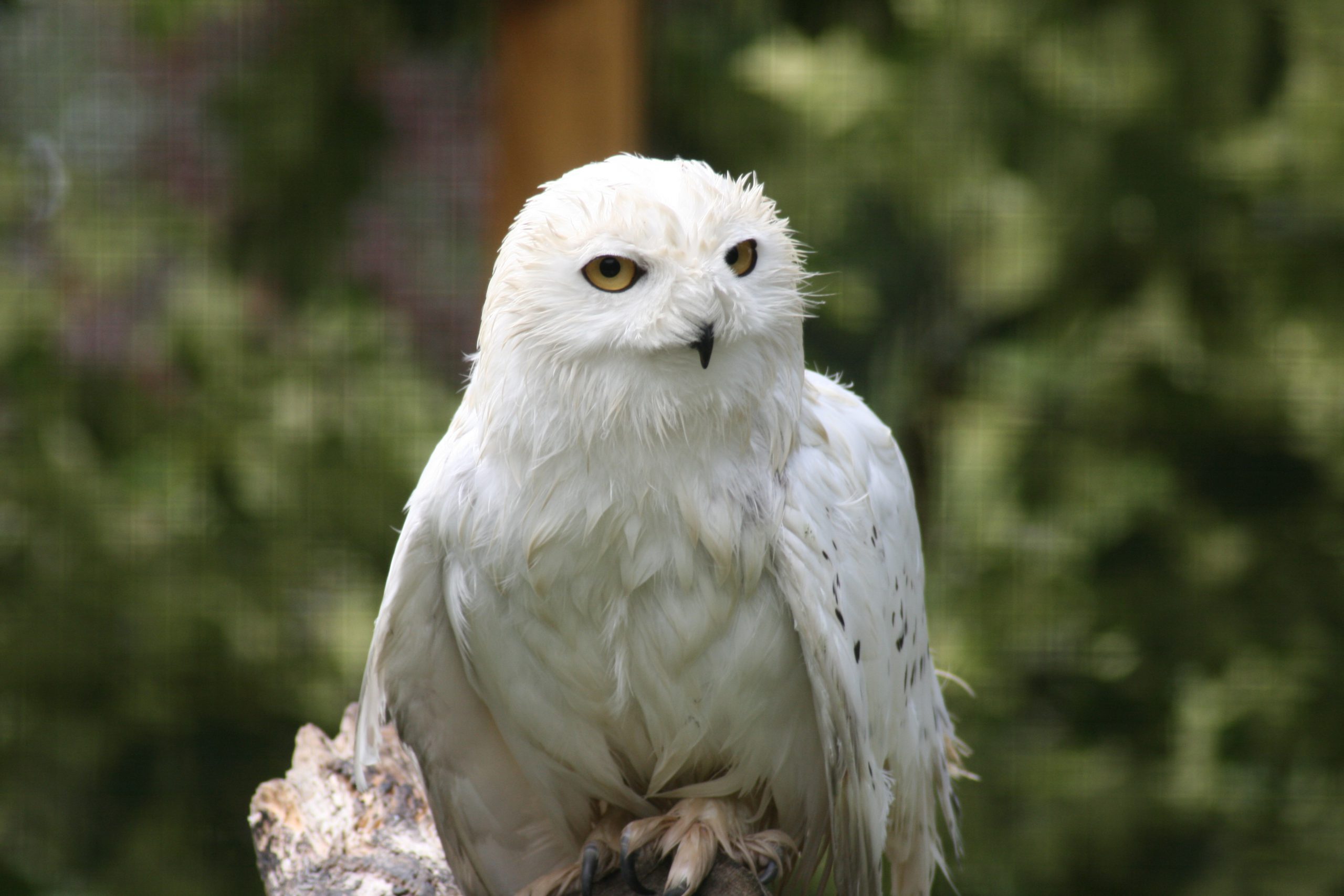 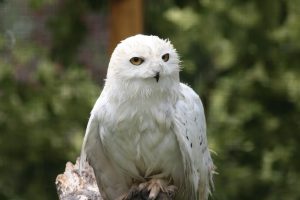 Snowy Owl
Nyctea scandiaca
Perhaps the most popular of the Owl species because of Harry Potter fame, Snowy Owls are one of the largest of the family.
They are native to most Northern areas of the world, from Alaska & Canada, through Scandinavia & Siberia to Asia. They will sometimes migrate further south in times of food shortage and this is when they may occasionally be seen in Northern Scotland, although there have been no recent breeding efforts here.
They are perfectly adapted for life in the Arctic Tundra, with thick plumage that extends over the beak and right down to their toes. This keeps them insulated from the cold. White feathers also help camouflage the animals in the snow, a perfect aid when hunting. 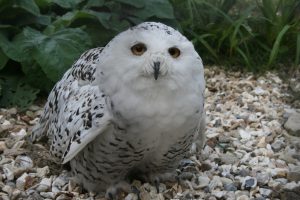 The main part of their wild diet is made up of Lemmings, although they have been known to take larger prey such as hares, gulls and ducks. At Birdland a diet of day old chicks, mice and rats is provided. Being in a polar region means that they are active during the day as well as at night, with the excellent eyesight associated with all owls.
Males and females can be distinguished by the plumage, with males tending to be nearly pure white, and the females marked with dark spots and bars. This helps to keep the birds hidden when nesting. Females are also larger than the males.
Nests are found on the ground and are usually a shallow scrape. Up to 11 white eggs may be laid, although clutches are usually around the 5 mark. Incubation starts from the first egg and lasts for between 33 to 36 days. By incubating from the first egg means that owl eggs hatch at intervals, not at the same time as with other species of bird. In times of plenty, all the chicks will be reared successfully but if food is scarce then the younger, weaker chicks will become food for the older youngsters. A somewhat dramatic but effective method to ensure some chick survival.
We currently house a pair of Snowys who have laid their first egg of the year on Wednesday. The pair had been busy making a scrape and you can tell when an egg is due as thy become far more agitated and vocal. Thankfully, with this warm weather they have nested in the one spot that is shaded all day round. Further eggs should follow this week
In other news

Wildlife wise the first Swifts of the year are present, with 4 screaming over the flamingos at feeding this morning. Also present was a House Sparrow, a very unusual sighting for the park
A Brimstone moth was also present 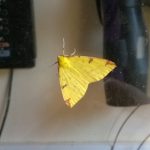