A South American owl chick, which hatched out earlier this year, is being hand reared by keepers at Birdland. 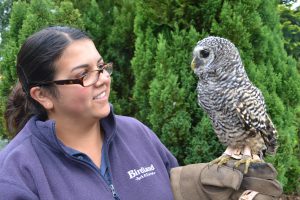 
The two-month-old Chaco owl, which has yet to be named, has already more than quadrupled in size from its birth weight of 20grammes.
Once fully grown it will be up to 36 centimetres tall and weigh close to 400 grammes.
Birdland’s Helen Perry said: “The owl is doing really well. It’s feeding strongly and is growing at an amazing rate.
At the moment the owl is still too young for us to be able to work out if it’s a boy or a girl so we haven’t named it yet but we’ll definitely give it a South American name to reflect its exotic background,” she added.
Helen has been spending time with the chick since it was 10 days old and has already begun training it.
If all goes according to plan the owl will eventually form part of Birdland’s educational talks and demonstrations for schools and visitors.


Found throughout Argentina and Paraguay, the Chaco Owl’s main prey are small birds, mammals and other vertebrates, but will also feed on insects, spiders and scorpions.
They are predominantly nocturnal hunters starting from dusk. During the day time they roost mainly in dense bushes, trees, or even sometimes on the ground.
Their nests are often made in holes in trees but sometimes on the ground under bushes or fallen branches. Breeding takes place in May, when usually two eggs are laid. Incubation is carried out by the female with the male providing food.