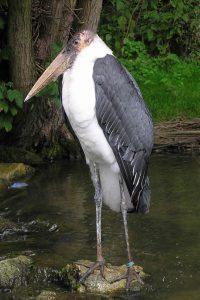 During February Half Term Holidays Birdland is celebrating birds behaving badly starting Saturday 15th until Sunday 23 February 2014.
From blood-sucking songbirds and puking penguins to stinking storks and spitting swallows, keepers will reveal revolting facts about some of the world’s baddest birds.
There will be toxic talks and terrible trails highlighting the horrible aspects of natural history and visitors will also be able to meet some real feathered critters during special meet the creatures sessions.
“Despite their often angelic reputations, birds are definitely among the worst behaved animals on the planet with some truly disgusting table manners.
The have also devised devilish defences and awfully amazing attacking abilities,” said Head Bird Keeper, Alastair Keen.
“The Marabou Stork defecates on itself in order to cool its legs, fulmar chicks aim projectile vomit at the face of any potential threats and oxpecker birds will open old wounds on cattle in Africa in order to drink their blood!
“Swallows, swifts and kingfishers use their own spit to build nests and the so-called ‘stink bird’ from New Guinea eats toxic beetles and then converts it into poison which covers its wings.
With its combination of woodland, riverside and gardens, Birdland features more than 500 birds, ranging from the UK’s only colony of king penguins and parrots to cassowaries and cranes in a mix of free-flying and aviary displays.