Welcome to the new Pandemonium of Parrots area at Birdland which is now home to 16 different parrot species.

Eight new aviaries have been constructed where visitors can view the new species including the kea and long-billed corella.

Learn fascinating facts about these colourful and brainy birds! For example, did you know that Parrots have four toes on each foot, two pointing forward and two projecting backwards?

We are also pleased to be raising awareness about the conservation and welfare work done by the World Parrot Trust.

The charity is currently focussing on raising funds and awareness to help support the endangered scarlet macaw.

Birdland Manager Simon Blackwell said: “We’re very pleased to be able to support such a worthy cause here at Birdland.

“The conservation work the World Parrot Trust undertakes is vital. It raises awareness about risks faced by parrot species in the wild. This includes loss of habitat and capture for the illegal trade in wild birds.”

“The new aviaries are already home to a pandemonium of parrots, the collective term for a group of the birds. They’ve settled in really well,” he added.

There are 387 species of parrots, known scientifically as Psittacine. Most species are native to the tropical and subtropical regions of Australia, Asia, Central and South America, and Africa. You can see some of the parrots at Birdland here including; Rainbow Lorikeek, Scarlet Macaw, Red Fronted Macaw and Miltary Macaw. There are also Umbrella Cockatoo, Golden Conure, Blue and Yellow Macaw and the Moluccan Cockatoo. 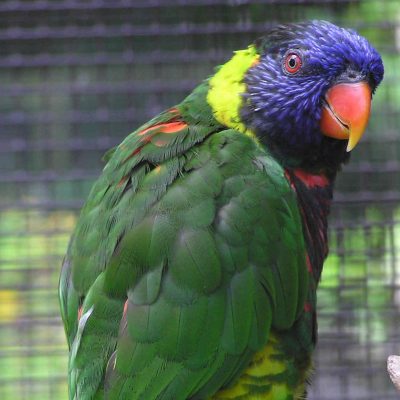