For the blog this year I will be highlighting one of our bird species every week and telling you a bit about them.  As always, the blog will continue to round up the weeks news and wildlife sightings as well.

So our first species to be spotlighted this year is:

Native to Africa
As with all members of the Spoonbill family (of which there are 6 species), the name derives from the flat, spatula like beak which the birds use to feed, sweeping from side to side in shallow water, gathering up small crustaceans, fish, molluscs, amphibians and insects.  They are social birds, nesting in colonies and building their nests of sticks and reeds off the ground in trees or reeds.  Between 2 and 5 plain white eggs are produced, with both parents sharing incubation duties for 30 days.  The young are fed at the nest until they fledge at approximately a month of age.
The wild population is doing well and is considered to be of least concern but there are captive breeding programmes in place to maintain healthy populations.

At present we hold 3 African Spoonbills (2 male and one female).  They are housed in our large netted Ibis aviary along with 2 species of Ibis, Crane and Waterfowl.  The birds are fed on a diet of minced meat, chopped chick and chopped fish.  In the past couple of years the birds have successfully produced eggs and chicks but as yet we have not had a chick survive to fledge.  The female seems to prefer the older male, pairing with him every time except one occasion a few years ago.
Rob encourages breeding behaviour by providing plenty of nest material (a full time job with 30 Ibis also looking to nest).  This can be judged as the birds become more vocal and red around the face.  We have a couple of sites where the Spoonbills can nest but they tend to choose different spots most years.  On each occasion of eggs being laid we have had clutches of 2, which we leave with the birds.  They unfortunately lost one chick on a particularly wet night 2 years ago and last year the nest was abandoned when the female was taken unwell, 2 eggs were removed and incubated and one hatched.  Unfortunately Spoonbills are tricky to hand rear and we lost the chick.  Hopefully this will be the year and I’m hoping to exchange our single male for an unrelated young pair from another zoo in the next few weeks. 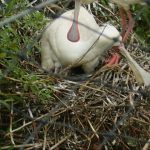 At this time of year we are shutting the Spoonbills away at night as the temperatures get low.  They, along with the ibis, are trained to go in at night to a shed attached to the aviary.  It then means that a keeper has to clean the shed every day as 40 birds can make quite some mess!  The Ibis aviary is the largest in the park and requires regular maintenance, from cleaning the pond through to checking the netting, pruning the trees and cutting the grass.
The individual birds are recognised only by their coloured leg bands.  Males and females look the same so we make sure that the 3 birds all have different colours so we can avoid any confusion on our records.
So that is our African Spoonbills

In news from the start of the year…..

The main story is that we have flooded slightly.  We have had so much rain in the past few days that the Windrush has overflowed in a couple of places.  None of the birds have been seriously affected thankfully.  We have had to move a couple of birds out of their enclosures where water has crept in and we have had to leave the Pelicans and Coscoroba Swans in on a few occasions.  The main area affected has been the Nature Area, which is impassable without wellies.  The play area too is flooded and there is a lot of lying water around the Cassowaries and near the Desert House.

Some of the new birds have been moved out to their aviaries.  The 4 Fulvous Tree Duck have joined our single male in the Ibis Aviary, the Orange Headed Ground Thrush has joined the female in the old Toucan/Temperate House & the Cape Teal have been moved into the aviary opposite the penguins.
We had a chat this week amongst the staff about upcoming projects and ideas for them.  Hopefully we will see a refurbished Discovery Zone, new Incubator set up and expanded Meet a Keeper facilities soon.
We featured in Cage and Aviary Magazine this week
Wildlife wise I took part this morning in the BTO’s Early Bird Survey.  This basically involved watching the feeders this morning as the sun rose and recording the time that different species arrived.  First on the feeders was a female Bullfinch and several species were present.  A Short Tailed Vole was also noted.

Thanks as always for reading