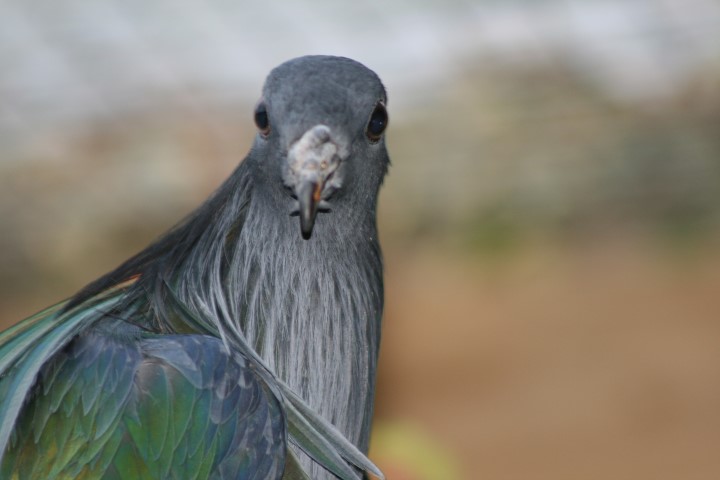 This weeks spotlight is a couple of days late – apologies for that, we have been very busy hand rearing the penguin chick.  This week we turn our attention to

Nicobars are native to a group of small islands and coastal regions of Asia, mainly around Cambodia, Thailand and India.  It is named after Nicobar Island where it breeds. It is listed as Near Threatened which is unfortunate as it is the only living member of its genus and is the closest living relative of the Dodo. Threats include habitat loss, hunters and introdced predators
It is a large pigeon at up to 40cm in length and is characterised by metallic green plummage over much of the body.  The head is grey as is the breast and upper neck. Hackles on the neck give the bird a ‘flowing locks’ look and these start grey before blending into green and copper colours.  The tail is white. Females are smaller than males and have a smaller cere, or knob, on the bill

They are quite nomadic, roaming in flocks from island to island.  They feed on seeds, fruit and buds.  They have a gizzard stone to aid digestion.
Breeding occurs in offshore islands so as to avoid predators.  They nest in loosely formed colonies with usually a single egg produced in typical flimsy pigeon nest, although they sometimes produce a second egg.  Both parents incubate the egg and incubation lasts for 30 days.  Both parents regurgitate a crop milk to feed the chick which will leave the nest at roughly 3 months.

We currently house 2 males in the aviary boulveard, with one having recently joined us from Avifauna in the Netherlands.  They are kept with 2 Pied Imperial Pigeons, a pair of Black Breasted Thrush and a single Grey Peacock Pheasant.  Diets offered include seed, fruit, insectivorous mix and live food.  We are coming to the time of year when they will be shut away of an evening as the temperatures drop.  We hope to get hold of some females very soon

The King Penguin chick continues to thrive. It is now 1.5kg, covered in down and out of the incubator as it can support its own body temperature
New arrivals this week have included 5 female Rex Cross Rabbits, a female Leopard Gecko, male Bearded Dragon and Corn Snake & a Budgett’s Frog. He is great as their nickname is the Freddie Kreuger Frog because they can be cannibalistic, have 2 sharp boney protrusions that look like fangs and will scream at you!! Perfect for Halloween

Wildlife wise I managed to finally photograph the Kingfisher this week, all be it from long range.  We also have a pair of Ruddy Darter Dragonfly still around

Thanks as always for reading