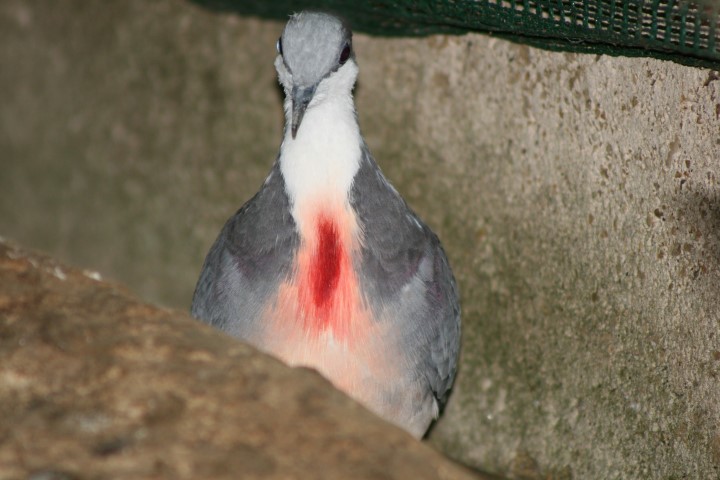 As with the other species of Bleeding Heart Dove we keep (the Bartlett’s), Luzons are a member of a family of ground doves found in South East Asia.  They are endemic to an island in the Philippines called Luzon, hence the name.  They are found in Tropical forest and they are Near Threatened, with the captive population managed via a European Studbook run by Bristol Zoo

The name obviously comes from the bright red plummage on the chest, which is most prominent in the Luzons.  Despite having labels up, we regularly get concerned members of the public informing us that there is a bird bleeding from the chest.  Males and females tend to look alike, with males perhaps slightly larger.

They are shy birds and rarely leave the ground.  They spend much of their time moving around in small groups, looking for food such as seeds and berries and small insects.  The groups keep in contact with a series of coos, which males also use to impress the females.
Nesting occurs off the ground in a trees and shrubs and the nest is a typical pigeon nest with a few flimsy twigs.  Two white eggs are laid and incubation lasts for 14 days.  Chicks, or squabs, are completely reliant on the parents to start with and are initially fed on a milky fluid regurgitated by mum and dad, before moving onto more solid food such as seeds.

We currently house a pair of Luzon Bleeding Heart in the old Toucan/Temperate House.  They are kept alongside a pair of Roul Roul Partridge, a male Orange Headed Thrush & female Violaceous Touraco.  The pair are fed on a diet of corn, seed and fruit and can access the diets of the other species kept with them.  The two are distinguished by coloured leg bands.
This year, a couple of nest sites have been provided with a basket and tray present.  Nest material in the form of hay, grasses and twigs are provided and this week the pair have produced two eggs.  This is a first for this pair, who were introduced together last year.  The female is sat tight so fingers crossed for some good news in a fortnight

In other news:
There is still a lot of courtship ongoing in the Penguin Enclosure, with all 4 female Kings paired with males, and the 4 spare males keeping each other company

The Red Crested Touraco eggs were infertile but they have been really vocal again today
The Snowy Owls abandoned their nest one night last week, leaving 6 eggs to chill – 5 had been good
The Rhea eggs are due to hatch anytime now but no sign yet
The female Bartlett’s dove is investigating her nest basket
We now have a webcam running live on the Greater Flamingos, available to view from the website https://www.birdland.co.uk/view-live-flamingo-webcam/2601/

Wildlife wise a Common Shrew was found dead in the Nature Reserve and there are a few butterflies about, with Meadow Brown & Speckled Wood the most common

We said goodbye to Helen as she left for pastures new. We wish her all the best in her future endeavors.  We have been joined by one of our volunteers, Tom, on a part time basis to help us out as we approach the Summer Holidays.
We are looking for a full time keeper/presenter to join our team so if you are interested, get your CVs in quick