Just a quick update this week as we have been very busy, with staff away on holidays and all the extra duties that winter brings.

The main drama of the week was that one of our female Pink Backed Pelicans took flight this week. She disappeared between 1 and 4 one afternoon and with no sign of her and no reported sightings we feared the worst. Thankfully a couple of days later we received a number of phone calls from the locals reporting that she was on some of the private fishing lakes in the village. A couple of attempts to catch her were unsuccessful but third time lucky as Chris was able to grab her. Although she was clipped fairly recently a few feathers had grown to give her just enough lift to take to the air. Needless to say she has been re-clipped and is none the worse for wear, a little lighter and hopefully not so keen to fly again having been mobbed by Gulls and at one point chased by a large, angry male Mute Swan.
This bird is nicknamed Lucy as she previously escaped quite a few years ago and was featured in the Echo. I can remember photos of Simon and previous head keeper Dennis ‘stalking’ the bird, with binoculars. On that occasion Lucy actually brought herself back to the park, landing in the Marabou enclosure. 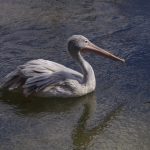 Lucy on one of the private fishing lakes
We also took the chance to clip Blue & Gold Macaw Diamond who was found on top of the Discovery Zone one night this week. I’m certain he didn’t fly there, rather that he fell off his perch, walked to the empty aviary opposite the aviary, climbed the wire and, egged on by his full winged partner Benji, kept going!

We have rung the three female Roul Roul Partridges in the old Toucan/Temperate House. The 2 juveniles are now nearly identical to Mum so plastic coloured rings have been put on to help us recognise who is who (mum is slightly bigger at present)

We are busy trying to source new birds for next year, with Humboldt Penguins a priority. We are toying with the idea of doing a morning penguin feed on top of the main afternoon talk.  Watch this space but hopefully we will have new Penguins, Spoonbills, Waders, Owls, Ducks, Geese and Thrushes to report before long.

Wildlife wise the Sparrowhawk is being regularly spotted and Kingfisher are still active. A mole is busy making hills in the middle section and although not on site, it was lovely to see Great Crested Grebe, Lapwing and Golden Plover on some of our Pelican hunts this week.

I’m away (again!) next week so the next blog edition won’t have the weeks news but keep checking out our website/facebook/twitter for all the latest news