The Marabou is native to central and southern Africa, moving between breeding and wintering grounds. They inhabit many types of habitats, from lakes and rivers to grassy plains. Their diet is made mainly of carrion (hence the bald head so as not to get their feathers mucky) but they will take live prey, from fish, frogs and insects up to adult flamingos.  They are also regulars around rubbish dumps, picking at whatever takes their fancy
At up to 1.3 metres tall and with a wingspan of 2.6 metres it is one the worlds largest flying birds. The sexes are alike in appearance, with males slightly taller. The alternative name for the Marabou is the undertaker bird, derived from its dark feathers, slow upright walk and usual presence around carcasses.  They possess a huge beak and a large gular sac, or pouch, under the beak where they can store food.  Our male is missing this as it was removed a few years ago as it became necrotic.

Breeding in the wild is seasonal, depending on the weather. Marabous tend to breed during dry spells and they are a colonial nester. Nests tend to be made in trees or on cliff faces and are constructed with sticks, with a small amount of grass lining. In comparison to the size of the bird, the nests tend to be small. Two to three white eggs are produced and incubation is around the 30 day mark. Chicks are initially covered in hair like down and do not reach maturity until 4 years of age.

We have them as one of our 10 disgusting birds this week as they have the habit of defecating on their own legs.  They do this is order to keep the legs cool.  So, although the legs may appear white in colour, they are actually grey/black naturally.
The wild population is listed as of least concern and it is believed that numbers are actually increasing, due to their habit of using waste sites.  In captivity the Marabou is monitored by EAZA (European Association of Zoos and Aquarium) and are part of a studbook to monitor polulation levels.

At present we have just the one male Marabou Stork, having recently lost the female to an aortic aneurysm (a enlarging of the aorta which eventually bursts).  We are in communication with the studbook about getting hold of a new female.  As and when this happens it will be a slow, soft introduction as these birds can fight to the death.
Traditionally the Marabous are the first birds you will see on entering the park, occupying the stretch of river opposite the gift shop.  Here, keepers feed them once or twice a day on a variety of food including day old chick, mice, rats, roach, herring, quail and mince meat.  Being on the river they can catch their own food as well, the male seen regularly wading into the river to catch trout (2lb is his PB) and you very rarely see ducklings on this stretch of the river

In the enclosure we have a couple of shed were the bird is shut away during the winter evenings.  Heat lights are set up here to keep him warm over the winter months.  The bird is clipped every couple of months to stop him taking flight, you certainly don’t want the Undertaker bird flying into the village.  On windy days he is kept in due to his huge wingspan.
We have never bred Marabou at bird land but did get close for the first time in 2011.  After years without showing any interest other than sitting on pebbles the then pair produced 2 eggs in July.  We think the trigger had been clearing some of the trees along the edge of their paddock.  Unfortunately the eggs proved infertile but it was still a huge achievement.


We will start this weeks news from the park with further updates on storm damage.  In the late hours of Friday night 3 more trees uprooted in the park.  An Ash tree on the river bank ending up resting on the riverside roof and just grazing the top of the first boulevard aviary past the penguins.  No damage was done and the birds were all fine.
we weren’t so lucky in the play area though as 2 more huge poplar trees came down.  One went straight through the Marabou paddock (thankfully missing the sheds) and the other landed on the gift shop roof.  Quite a bit of damage has been done and part of the gift shop is now off limits.  As this tree came down it landed on our phone lines and the force was so hard it has uprooted the telegraph pole on the main road, so we have no phones at present and our card machines are also down. 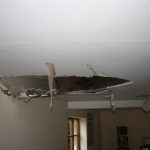 This meant we were closed during Saturday during the tidy up, a crane was called in to lift the large trunks across the pathway up and out and Neil our tree surgeon worked tirelessly to get the park accessible.  As a result we were able to open Sunday.
We are still flooded in parts of the park.  Marshmouth is very much a no go area and there is still a lot of water lying in the middle.  All but 6 aviaries are accessible without wellies and we have kept the pelicans in as the river speed is a danger to them and us as we shut them in.

The male Madagascar Teal has been introduced to the female this week with no problems.  We have also moved the new Pied Imperial Pigeons into one of the boulevard aviaries.
The young pair of Striated Caracara continue to nest build
The Greater Flamingos were displaying yesterday in the sunshine
The Kingfisher is being regularly seen as flood waters make it a bit harder for him/her/them to catch food

See you next week