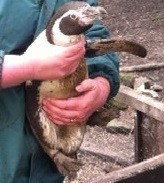 This week saw our annual review with Simon (our manager), Nikki (PR) & Ian & Michael (our owners). This is where there were discussions on a wide range of topics including visitor attendance, incomings and outgoings & future plans re advertising, leaflets etc. Most of this was conducted by the management but myself and Chris also had some involvement when it came to future plans.
I’m not going to go into too much detail but basically our part was largely ideas for what species we might like in the future, any feedback we had had from the public on stock, aviaries or the park and how we will the increased number of presentations went this year and how it affected us.
Some of the ideas will be implemented for next year, for example there is the very real possibility that we may do two penguin feeds a day. Other ideas may take a while to bear fruit and others may not happen at all but it nice to have plans and targets in place and exciting times are ahead if some of the discussions come to pass.
It’s always nice to see the owners and hear their thoughts and I always come away from these meetings buzzing with ideas and eager for these projects to start. It was good for Chris, as my assistant to also have involvement and it’s important to hear his thoughts as he has led meet the keeper and the flamingo feeds this year. Hopefully he will be getting further training.
Also discussed were any future dates next year where we can hold events. This year Penguin Awareness week & International Owl day have worked really well and we are keen to expand this. We also want to find ways of attracting more children and several possible ideas were banded about.
Sorry I can’t reveal too much but it should be exciting times ahead.

In this weeks news:
It has been a quite week with not much going on. The biggest news really is that we have been microchipping some of the birds. This has been conducted on some of our rarer species as we have to have several ways to identify the individuals. Two of the Humboldts (Chloe & Millie) were chipped and we also took the chance to tag Chloe (now sporting Red & Yellow if you are visiting) 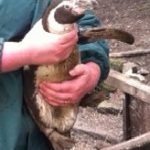 Firm grip required!
More of a challenge were the Waldrapp Ibis. First off we had to get all 10 birds shut in and as we have 3 youngsters from this year who have never gone in the shed before this could have been tricky. Thankfully, myself and Chris with help from volunteers Jack & Jon got them in at the first attempt. The birds were then individually caught the next morning, given a health checked, micro-chipped and tagged where necessary (the 3 youngsters needed tagging for the first time and a couple of the adults had lost rings).
We may be doing more chipping in the next few weeks.

No births this week and egg wise it just 5 Java Sparrow eggs from the group in the Desert House.
The Madagascan Teal male died last week from a heart attack according to the PM
Its that time of year where we are seriously starting to look at moving stock on and bringing new birds in. Hopefully we have some new Spoonbills coming as well as a new species of Duck. Egret (2 species) are also a potential arrival in the next few months, with our old pair of Caracara & 2 juvenile Macaws scheduled to depart.

Wildlife wise the Kingfishers have been giving great views from Windrush Hide in Marshmouth Reserve & a family of Long Tailed Tit has been active.
A hornet was seen by the staff room & a Feathered Thorn Moth was a first for me on the penguins labels.

Thanks for reading, see you next week