Last week saw International Duck Day falling on the 13th of January so to mark the occasion, this weeks species spotlight falls upon one of our waterfowl 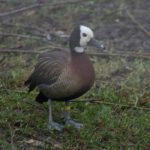 As with all members of the Whistling Duck family, the name is derived from the loud whistling call that they make when in a group. They are a social species with wild flocks numbering in the thousands. They are comfortable on land with an upright stance.
Males and females look alike, although the female has a hint of brown in the white of the head and neck. Breeding can occur all year round with nests mostly built on the ground, although they have been known to nest in hollow trees. The nest is sparse, with grass lining and usually well concealed. 8-12 creamy white eggs are laid and incubated by both parents for 28 days.
At present we have 8 White Faced Whistling Ducks. As you may have seen on recent blogs we have had a few arrive in the past month or so, with 4 birds coming from Slimbridge and 2 from Chester to join our existing two birds. The new birds all hatched in 2013 and as juveniles are more sensitive to the cold are currently being kept in the aviary opposite the café, where they can be shut away at night, out of the cold. Our original pair are in the Ibis aviary where they stay out overnight.
With the 6 youngsters we do not yet know their gender, so will be doing DNA facing sexing in the next few weeks. Ideally they will prove to be 3 males and 3 females but if not, it shouldn’t prove too difficult to find mates for any unpaired birds.
Diet wise our birds are given a mix of waterfowl pellet, chopped lettuce, flaked maize and mixed corn. Grass is available for grazing and the birds have access to other feeds in both aviaries, where we keep Ibis & Egrets. All 8 of our Whistling Ducks are full winged and can fly around and can be individually identified by their individual leg bands, which are either metal or plastic rings of various colour and bearing different codes.
We should be mixing the separate groups in the coming months as it warms up and hopefully eggs will follow.

In news from the park this week…..
It has been drier so the river level hasn’t risen any further this week although the Nature Reserve remains closed to flooding and several pathways still require wellies to get through. We had one severe frost which caused no problems but you know it’s cold when you spend half your morning defrosting padlocks so you can get into work and into the aviaries.
We have had the first egg of 2014 with our ever reliable pair of Bartlett’s, or Mindanao, Bleeding Heart Pigeons producing an egg. Mum will incubate the egg for the next 16-18 days.

The male Tawny Frogmouth who arrived from Cotswolds at the end of last year has gone out to join the female. As expected, they have introduced together well, with no problems.
The Cattle & Little Egrets have been moved to the aviary opposite the café. This aviary has been under redevelopment and still requires a pond but gives the birds more room compared to their off show pen. Initially they were kept in for one day before letting out. We have also let out the 6 new Whistling Ducks and the Comb Ducks in this enclosure. 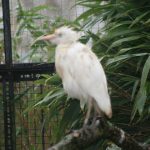 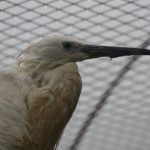 We have also tried letting the Coscoroba Swans back out. It sounds silly but because of the river levels we have had to keep them in as the speed of the river is quick through their enclosure and the new male is not used to moving water. Unfortunately we had to catch the birds back up as they were both carried by the river into the next enclosure! No harm done.

We are preparing for Penguin Awareness Day which falls on Monday January the 20th. Watch out on of Facebook for lots of penguin trivia and the chance to win a penguin feed. We will also be running a quiz over the weekend as well on site.
We are also preparing for the RSPBs Big Garden Birdwatch on Saturday the 25th. I’ll be spending an hour in Marshmouth Reserve armed with telescope, binoculars and bird guides to see who is dropping into the feeders.
There is still a lot of wildlife about despite the floods. Lesser Redpoll are becoming more frequent with huge numbers of Dunnock, Great Tit & Blue Tit around. We have also noted Coal Tit this week.  Several Bullfinch and Long Tailed Tit remain 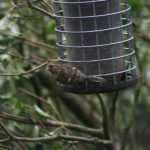 A large unidentified Bird of Prey was seen flying over the park on Tuesday. It was Buzzard size but the wings were too long and the bird lacked the V shaped tail of a Red Kite. There has been a Hen Harrier around up the road at Rissington so it may have been that? The Kestrel male has been really showy around the park this week and the Sparrowhawk continues to pester the Turtle Doves, sitting on top of the aviary.
Sadly a Muntjac body was found in the floods in the Nature Reserve, the first recording of Muntjac on site.

Thanks for the read and we’ll see you next week