Also known as the Crowned Lapwing, they are a member of a subfamily of Lapwing that also includes Masked & Blacksmith Plovers, which we also keep.
They are native to Southern & South West Africa where they are widespread. Preferred habitats tend to be areas of short, dry grassland. There numbers have increased in recent years and they are listed as least concern by the IUCN.
The name is derived by the black crown on top of the head which is surrounded by a white ring. They have red beaks and legs and the plumage is brown and white. Males are ever so slightly larger than the females and they are both vocal. Outside of breeding season they are fairly social and will for small flocks.
Diet in pretty much insect based and termites are also taken.
As breeding season approaches, males start to defend their territories, mainly through a series of postures. They then woo the females by a series of display flights. Crowneds sometimes pair for life. The nest is a shallow scrape on the ground and approximately 3 mottled eggs are laid and incubated mainly by the female. Incubation is 28 to 32 days and the chicks are active upon hatching, following the adults as they find food. They may live for 20 years.

As of today we have 8 Crowned Plovers on site, 3 males, 2 females and 3 chicks hatched this week. They are housed in an aviary with Hamerkop, Puna Ibis and a large group of Azure Wing Magpies. As luck would have it, the parents nested in the shed so we have been able to shut the family inside for now so as to have no problems with the rest of the group. Diet is a meat mix that we make on site and mealworms, although other feeds are also available.
Hopefully the chicks will be on show soon.

In other news….
A couple of windy days meant that we had to keep the Pelicans and Marabou in for a couple of days. This proved a wise move as a branch came down in the winds in the Marabou paddock, no damage done. The Pelicans don’t seem to have been phased and are still continuing to nest build.

Humboldt Ron has finished his moult, with Neville just beginning
A juvenile Roul Roul Partridge departed to a private breeder
King Penguin Bill has been tagged this week yellow and black left wing
The Northern Helmeted Curassow broke an egg
It’s been a busy week so the Encounter Zone has proved really popular, with up to 4 members of staff occasionally required.

Wildlife wise it has been pretty quiet, with a juvenile Bank Vole seen.

Insects included a spider (Leiobunum rotundum) & Comma caterpillar, both in my Penguin shed 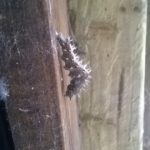 The Kingfishers are still active around the park.