This week we highlight a species who fledged 2 chicks 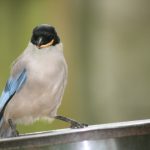 There are 2 distant sub species of the Azure Wing, with one population (the one we keep) found in China, Japan & Korea, and the other located in Spain and Portugal.  They inhabit temperate areas of both woodland and grassland and their population is of least concern.
They are a smallish crow at around 31cm in length.  Sexes look alike with a long blue tail and wing feathers, a black cap and greyish body.  They are constantly active and vocal.
Their wild diet is omnivorous, meaning that they take a mixture of insects, seeds and fruit and occasionally nuts as well.  Our group is fed on an insectivorous mix with finely chopped fruit and live food provided.
Azure Wings are social birds with large groups of up to 70 forming.  They nest in close proximity to each other with a clutch of between 6 to 8 eggs laid. 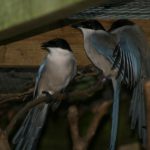 We provide open fronted nest boxes which seem to work well and straw/hay and twigs are provided so the birds can build the nests.  Eggs are incubated for 15 days with both parents and sometimes older siblings feeding the chicks, who take a couple of weeks to fledge.
This week 2 chicks fledged on Sunday, with at least 2 more nest boxes currently occupied.  The chicks are doing well and are being well protected by the adults 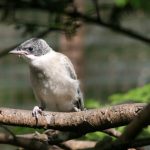 With the hatching of these chicks, our group now numbers 22 birds, housed in the middle of the park along with a group of Crowned Plover and single Hamerkop & Puna Ibis.  The birds have to be identified by their individual coloured rings so we will have the fun task of catching the birds up in the next few weeks to ring and feather sex the young.

In other news this week
We have built some artificial Flamingo nests in order to encourage the Greaters to breed.  Some interest has been show with the warm weather a bit of a trigger.  A fake egg has also been placed on a nest to see if that entices anyone to sit
Both pairs of Striated Caracara are showing interest in their nest boxes
We have 3 potential pairs of King Penguins forming, with Seth & Missy, Norman & Bill (female) & Frank & Lily actively displaying
The Fulvous Tree Duck have a nest of 9 eggs
The Red Crested Touraco have ignored 2 nest sites and laid an egg on the shed floor, a basket has been placed underneath for safe keeping
The Bartlett’s Dove also have an egg
The Snowy Owls are on 5 eggs
A Nothern Helmeted Curassow egg has started hatching as of today 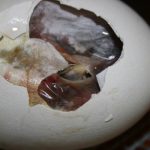 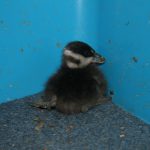