Apologies for the late bloggage, a combination of difficulty getting on the website, a now mobile baby and the topic of this weeks blog means I ran out of time yesterday!

This week we have been thrilled to announce the hatching of the first King Penguin chick in the country for 5 years.  As I result, I thought I’d share some images and tell you a bit about the chick.

The chick is from the first egg of this year which was laid by Lily and her partner Frank and  hatched on Tuesday the 3rd of September at around 3.30pm.  The hatch was nice and clean and was unaided by us.
When the chick started breaking through the egg, it was transferred to a hatcher, where we could control temperature and monitor its progress. The egg was regularly sprayed with warm water as it is very important to keep humidity up and prevent the inner membrane of the egg from drying .

At hatch the chick weighed 203 grams and then given a health check and clean. This involved checking that the yolk sac had been absorbed during the hatch.  It was then left in the hatcher to dry out for the rest of the day.

The following day the chick was given water and then moved to a brooder unit.

The first feed was given at 12pm and the chick produced a feeding response immediately, pushing up against my fingers, mouth wide open just as it would do with the parents. The diet is a delicious formula of filleted herring, squid, vitamins, various tablets (salt, calcium etc) & 300ml water blended for 5 minutes and fed at 8, 12, 4 & 8. Luckily we have staff on site and in the village for the evening feed. The food was initially given from a 3ml pipette and slowly dribbled into the beak but the chick has already progressed onto a 10ml syringe.  From day 6 it has also been receiving small amounts of finely chopped herring and squid. The penguin can already recognise our voices and that is often enough to get feeding behaviour stimulated.

Food is prepared every morning

Hard to miss that target really

At each feed the chick is weighed and records are keep, so we can monitor development and for reference in the future.  The 8am weight is what we base the days feeds on, with the chick receiving no more than 10% of the weight at that time.  Too much food equals fat chick and poor development. It has only been the last few days that the youngster has started to take the full amount.
As a precaution the chick has had a small course of antibiotics, just to ward off any threat of infection from the yolk.  Every bit of equipment is thoroughly sterilised and the chick has fresh towels at every feed.  A cuddly toy is provided as if with the parents, the young penguin would be snuggling up against its parents.  The temperature of the brooder is reduced slightly every day and it won’t be too long before the chick is moved to a larger container. At present it is pretty much bold but there are already the hint of a few tail feathers coming through.
As the chick continues to progress we hope to start showing it off to the public soon and also to set up a webcam. Keep checking facebook and twitter for details. I’ll finish the chick section with a few of my favourite photos from the past 10 days 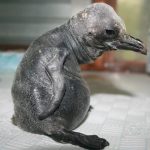 Thanks for the read